The Generation Divide in Workplace Communication We Face as Managers 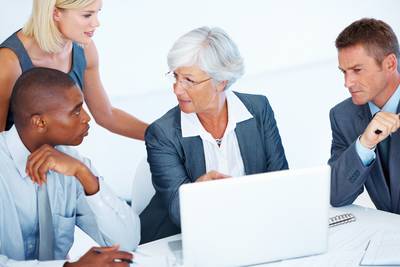 With four generations active in the workforce, communicating effectively with each individual in his or her preferred style is one of a manager’s many challenges. We’ll take a look at each generation’s preferred method, and how to develop a communication strategy to satisfy each employee in his or her own unique way.

The oldest generation in the workplace is getting ready to retire, and the newest is about to start a first part-time job while still in high school. Knowing about communication styles is an important skill to possess as our workplace gets more diverse.

Their communication style is a direct reflection of their generation name. Traditionalist feel that no news is good news. As a supervisor, feel free to ignore giving positive feedback to this generation since they believe in getting the job done and getting it done right. They value hard work, duty before fun, and they adhere to the rules. If feedback is needed, it must be done in a formal way. Don’t walk up to someone from this generation and tell him or her something’s wrong with their work. Set up a meeting, and let them know there.

A little less formal then their predecessors, Baby Boomers prefer in-person communication. If you have to formally write them up, don’t send them a message or simply hand them a piece of paper. They will expect you talk to them about what types of behavior aren’t working out in their daily routine. But be warned: they don’t appreciate negative feedback. Somewhat like Traditionalist, they value recognition in the form of job titles and money, rather than direct feedback. If your marketing manager is doing a great job, give him or her a job title promotion to VP of Marketing. That’ll make her feel appreciated!

“I want it and I want it now,” Generation X is all about immediate and direct feedback. Constant feedback should be routine for this generation. Don’t beat around the bush with employees who fall into this bracket, because they won’t take it well. They value freedom and choice. As our world is moving more and more towards telecommuting, give them the freedom to choose office or home when deciding upon their ideal work environment. They will constantly seek feedback from their managers, and if it’s not provided they may think they’re doing a bad job. Basically, they’re pretty much the complete opposite of Traditionalists.

Similar to Generation X in the amount of feedback they want, Generation Y seeks out confirmation of a job well done through ongoing feedback. If it’s not being given, they will ask for it. Be ready to provide specific examples, because they can tell when their manager or boss is making up something to keep them happy. If you don’t have any complaints, tell them. But if you do, Generation Yers might get a bit defensive and explain their way out of it. Their communication style tends to be very informal. Call, text, and email are all acceptable forms of communication. Depending on the work environment, Facebook might also be a good alternative. But don’t send them a written memo.

As you can tell, each generation has its own way of communicating. You wouldn’t want to send a co-worker from the Traditionalist Generation a message on Facebook about work. As supervisors, were charged with the task of knowing how to effectively communicate with each employee, despite his or her different styles. The information provided here should help you understand the basic principles behind each communication style across the generations. Generation Z is about to enter the workforce, and it’ll be another generation to learn about.

Have you ever had a problem communicating with an employee from a different generation? What have you learned about different communication styles?

Companies worldwide in a variety of industries use eSkill to simplify the hiring process. Watch our video to learn why.